London is the capital city of Great Britain and is the largest city in Europe. It is situated at the head of the Thames River estuary, west of the river’s mouth on the North Sea. One of the world’s most important financial and cultural centres, London is noted for its museums, performing arts, exchange and commodity markets, and insurance and banking functions, as well as a venue of many of the UK’s greatest historical sites. In popular and traditional usage, the term City of London, or the City, is applied only to a small area (2.59 square kilometres) that was the original settlement (ancient Londinium) and is now part of the business and financial district of the metropolis. The City of London and 32 surrounding boroughs form the Greater London metropolitan area, which covers 1,579 square kilometres.

The physical layout of contemporary London is the product of complex historical events and growth forces. The fort of Londinium, founded by the Romans in the mid-1st century AD, and the administrative centre established at Westminster 1000 years later, served as the nuclei for subsequent development in central London.

The city of London has been largely rebuilt since World War II (1939 – 1945), when it suffered severe damage from German bombing, however many historical buildings such as St Pauls Cathedral, the Tower of London and Tower Bridge survived. The rebuilding has reinforced London’s importance as a financial and commercial centre. The City is linked by Fleet Street and High Holborn to Westminster and London Bridge provides access to South London on the southern side of the Thames River. To the north and east, beyond the perimeter of the former Roman and mediaeval walls of the City, is the East End. Noted for its warehousing, wholesale clothing activities and the production of furniture and precision instruments, this area was more severely damaged by bombing than any other part of London and has been the scene of considerable reconstruction. Traditionally, various ethnic minorities and the poor occupied the East End, encompassing such neighbourhoods as Whitechapel, Limehouse, and Bethnal Green. Near the East End and just east of Tower Bridge is the Docklands, a large area that was a thriving commercial district during the 18th and 19th centuries. Ships carrying raw goods from the colonies and manufactured products to England’s trading partners passed through the district’s many basins, locks and canals. As the area decreased in importance, the Docklands fell into disrepair. Since the 1980s, however, the Docklands has been undergoing extensive redevelopment. Warehouses are being converted to restaurants, exhibition centres, museums, hotels, and residential space. London City Airport is here, and Docklands Light Railway, a rapid-transit system providing a direct link to central London, services the area. On the west side of the City is the legal quarter. This area is one of the important outgrowths of the mediaeval city along Fleet Street. In the 14th century lawyers; subsequently, Temple Inn and numerous other Inns of Court, such as Lincoln’s Inn occupied the Temple, which had been founded by the Knights Templars, and Gray’s Inn, arose in the vicinity. In the 19th century the Royal Courts of Justice were constructed just off the Strand. To the north is Bloomsbury, which is the centre for the University of London and the British Museum and is also known for its association with such literary figures as Virginia Woolf and D. H. Lawrence. Farther west along the Strand is the historic political centre of Westminster, where the Houses of Parliament and Westminster Abbey are located. A central feature is the Mall, a processional road that links Trafalgar Square with Buckingham Palace.

Also notable here is Covent Garden, designed by the English architect Inigo Jones in the early-17th  century. It was London’s first formal square surrounded by town houses, although it eventually became an important fruit, flower, and vegetable market, a function it lost in 1974. The city developed many similar squares, around which large houses were built for the wealthy. Covent Garden served as a model for Bedford, Belgrave, Berkeley, Grosvenor, Russell, and a host of other squares in the now fashionable neighbouring districts of Soho, Mayfair, Belgravia, Bloomsbury and Marylebone. These squares in turn influenced the location of major northern-southern thoroughfares in the West End, such as Bond, Baker,and Regent Streets. Today these streets have become the leading shopping areas of the West End, with Piccadilly Circus and Soho serving the gastronomic and entertainment needs of the people. Many of the grand houses have since been converted into commercial property.

Toward the middle of the 19th century, urban development had spread north of Oxford Street to reach Marylebone, Euston, Pentonville, and City Roads. Along this route the major railroad companies located the stations of Paddington, Marylebone, Euston, Saint Pancras, King’s Cross and Liverpool, which today serve western, northern, and eastern England. Access to southern England is provided by Victoria, Charing Cross, Waterloo, and London Bridge stations. Saint Pancras is also now the home of the Eurostar, providing access to Paris and Brussels and on to the rest of Europe. 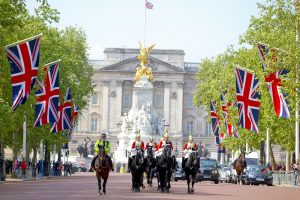 London is noted for its abundance of park spaces. The most notable are the Royal Parks, which were formerly royal estates. These include St James’s Park and, to the west, Green Park, Hyde Park and Kensington Gardens. To the north is Regent’s Park, and farther upstream along the Thames are Richmond Park, Hampton Court Park, Kew Gardens (also known as the Royal Botanic Gardens), and Bushey Park. (Of course The Royal Horticultural Society also holds world famous flower shows at both Chelsea Hospital and Hampton Court.) Surrounding the Royal Naval College and the old Royal Observatory is Greenwich Park. Other important open spaces include Hampstead Heath and Parliament Hill Fields, which overlooks London from the north.

London is also known for its outdoor street markets where vendors sell everything from expensive antiques to bargain jewellery and second-hand clothing. The Camden Lock Market, one of the largest, is located on the north side of the city. The East End has the Petticoat Lane Market, its name being derived not from the street location but from the days when the wares were mostly clothing. On the west side of the city, the Portobello Market offers fruits and vegetables during the week and antiques and a variety of basic goods on the weekends.