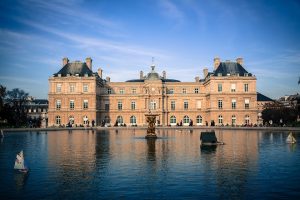 With its turbulent history, and tucked between larger, stronger neighbours, it is a quirk of fate that Luxembourg emerged as a sovereign Grand Duchy in the 1830s. When the Romans arrived in 54BC, the found a prosperous iron working tribe called the Treveri, who had settled close to the Moselle Valley some 600 years earlier. With the decline of the Roman Empire, the region came under Frankish control. The Franks also brought Christianity and a German tongue, “Letzebuergesch”, a form of which remains the national language today.

With the death of Charlemagne, Luxembourg finds itself at the centre of a tug-of-war between larger rivals. Originally part of Lotharingia, Luxembourg is absorbed into The Holy Roman Empire under which the first Count of Ardennes acquired the castle of Lucilinburhuc on the Bock, on which Luxembourg City now stands, and are sometimes cited as the first counts of Luxembourg. These counts fortified their stronghold which became a formidable bastion and the hub of a small state, strategically placed between the Low Countries, Germany and France.

In 1354, this small state was made a duchy within The Holy Roman Empire, but when the royal line died out, it was absorbed into the larger Duchy of Burgundy, which already controlled much of the Low Counties. With the death of its duke, Burgundy itself came under the control of the Hapsburgs. However, the Prussians, Electors of Brandenburg and the related Orange-Nassau family also laid claim to Luxembourg. In pursuit of his claim to the Spanish Netherlands, king Louis of France invaded in 1684, and rules until 1698, in which time the city was much fortified by the energetic military engineer Vauban.

The French returned in 1794, sweeping Hapsburg rule, but the final defeat of Napoleon in 1815 put Luxemburg’s fate in the hands of the victorious allies at the Congress of Vienna. With competing claims the compromise was to appoint William I of Orange, King of the Netherlands, as Grand Duke. The Grand Duchy also became a member of the German Confederation and its neutrality had to be guaranteed by the Treaty of London 1867.

In 1890, William III of Orange died and, whist succeeded by his daughter in the Netherlands, Salic Law forbade a female heir to the Grand Duchy, which was passed to relative, Duke Adolphe of Nassau-Weilburg, founder of the present dynasty. Salic law was abandoned by Grand Duke William IV, who was succeeded by several formidable Grand Duchesses. Luxembourg was occupied by Germany in both World Wars. There was bitter resistance against Nazi annexation and Luxembourg was the scene of the devastating Ardennes Offensives in 1944-5.

Following the war Luxembourg became a keen advocate of international cooperation. It formed part of the Benelux Customs Union in 1950 and was a founding member of the EEC, the forerunner of the European Union, in 1957. Today Luxembourg is the location of various EU institutions, including the European Court of Justice and the European Court of Auditors. In 2000, Grand Duke Jean, married to Belgian Princess Josephine-Charlotte, abdicated in favour of his son, the present Grand Duke Henri.

The Grand Duchy is Luxembourg measures just 80 kilometres (50 miles) north to south, with its capital, Luxembourg City, and most of its population in the southern part of the country. This is both the traditional farming and industrial heartland of Luxembourg. The north is dominated by the wooded hills of the Ardennes, while the beautiful landscape of “Little Switzerland” lies to the east.

Most visitors are attracted to Luxembourg city, with its “Vielle Ville”, perched high on an escarpment over verdant ravines. Most of the ramparts which once defended this stronghold have now disappeared to be replaced by the stately web of streets and squares, built mainly in the 18th and 19th centuries. The Grand Duke’s Palace occupies the site of the old medieval hall and its sumptuous interior can be visited during summer. The city has a fine cathedral, the remains of an ancient castle and several impressive art galleries, including the acclaimed “Musee d’Art Moderne Grand Duc Jean”.

Military historians will be fascinated by the “Casemates de Bock”, part of the ancient fortress, and by the later “Drai Eechelen”, a fort originally built by the Austrians and now part of the Vauban Circuit. Those interested in the European venture may wish to view the Centre European, a number of architecturally acclaimed building housing the European Investment Bank and the Secretariat of the European Parliament

Those wishing to explore the grand Duchy further will no doubt be drawn to the Moselle Valley, with its quaint wine producing villages, including Schengen, where EU ministers agreed the free flow of people and goods across European borders. The scenery of “Little Switzerland” is a great attraction to nature lovers, but also boasts Luxembourg’s oldest town, Echternach, while the Ardennes’ wooded hills are dominated by scenic castles such as mighty Vianden.

There are direct fights taking approximately 1 hour from London and Manchester but Luxembourg is also visited as part of a tour to its neighbours, Germany, Belgium or the Netherlands.

For more details about possible tours of Luxembourg or to arrange a bespoke adventure, please get in touch with us.