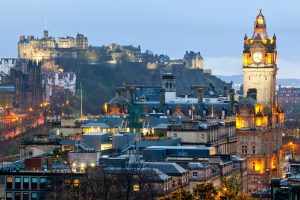 Scotland, land of tartans, clans, bagpipes, whisky, haggis and heather, is a country rich in culture and natural heritage. Explore the very best of Scotland’s countryside from the Borders in the South to the Highlands and Islands of the North and experience the people, the history and the natural heritage of Scotland’s diversity.
The culture ranges from the reborn sophistication of Glasgow with its Burrell Collection to the rugged isolation of the islands of Shetland, Orkney and Skye; from the grandeur of the Highlands with Loch Ness, Loch Leven and Pitlochry to Edinburgh, the Athens of the North.
Scotland and England became united under the crown of James I/VI in 1603, and by the act of union in 1707, however it fiercely retains its own identity with aspects taken from the Pictic, Celtic, Gaelic and in the north of the region there are close links to the Nordic countries through language, life style and history. The Shetlands, for example, are just over 300 km from the Norwegian coast and were under Norse rule until 1469.

Edinburgh
The city of Edinburgh, the capital of modern day Scotland, is of great political, cultural and historical interest. Located near the Firth of Forth, in the Scottish Lowlands, Edinburgh is a city of two halves. The old part, with its impressive castle and the Royal Mile stretching down to Holyrood Palace contrasts with the more recent section of garden squares and elegant Georgian architecture. Princes Street is one of its best-known thoroughfares.

Edinburgh is a sophisticated city with a long and rich history, gothic monuments, a royal palace, challenging museums, interesting art galleries and many churches. The Edinburgh Festival and Tattoo are held in August.
Edinburgh also provides an ideal base to explore historic Stirling and Rob Roy’s Trossachs.

Glasgow
Glasgow has for most of its modern life, been an industrial city famed for its shipbuilding and heavy industry thanks largely to the city’s great Victorian heritage, showcased in the famous Burrell Collection. However, it has most recently transformed, and was successful in 1990 in being named as the European City of Culture. It is Scotland’s largest city which has continued in its revival efforts to be awarded UK “City of Architecture and Design 1999”.
One of the older city establishments is the Cathedral of St Mungo where the first building on the site dates back to 600AD. Adjacent to the cathedral is a smart 1993 building housing a Museum of Religious Life and Art.

Fort William
This typical and historic Highland town is located close to Ben Nevis, Britain’s highest peak (1344 m) and dramatic Glen Coe, the site of fierce clan battles and the massacre of the MacDonalds by the forces of William of Orange.

Elgin
Elgin is Britain’s most northerly city and site of ancient cathedral ruins. The cathedral, once known as the Lantern of the North, was severely damaged in 1390 and ravaged in 1576 but the architecture and construction styles are still to be admired, as are Elgin’s cobbled Market Place and crooked lanes reminiscent of its mediaeval layout.
Elgin is also an ideal base to explore some of the Highland’s most important historical sites including Culloden Moor, Shakespeare’s Cawdor Castle and Inverness, capital of the Highlands.
It was at the Battle of Culloden, on marshy flat moorland, that the Jacobite forces of Bonnie Prince Charlie were slaughtered by the government troops (of mixed English and Scottish origin) led by the Duke of Cumberland. Following this defeat the clan system of the highlands was made illegal, tartans and kilts were forbidden and the bagpipes were outlawed as ‘an instrument of war’.
Cawdor Castle was depicted as the setting of King Duncan’s murder by MacBeth in 1040. However, we should remind readers of Shakespeare that there is an anachronism, in that the Castle was not built until the mid 14th to 15th century!

Pitlochry
Pitlochry is located in the southeast highlands and became popular after Queen Victoria described the resort as one of the finest in Europe. Pines surround the town and wild salmon leap up the Tummel River. It is at the geographical centre of Scotland.
Just north of Pitlochry is the site of the Battle of Killecrankie (1689), which predates the Government (British Crown) – Highlander (Jacobite) clashes at Dunkeld and the final battle at Culloden in 1746. This location also houses a National Trust Nature Interpretation Centre.
Blair Castle, located north of Pitlochry, has the distinction of being granted the right to raise its own army by Queen Victoria. The castle is the home of the Dukes of Atholl, chiefs of the Clan Murray. This 700-year-old castle boasts having had Mary Stuart and Bonnie Prince Charlie as guests.

The Islands of Scotland 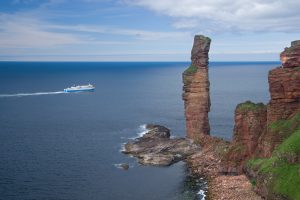 Scotland has over 700 islands scattered around its coastline, each with its own individual character, identity and charm. From the Clyde Island of Arran with its rugged granite mountain peaks in the north and green rolling hills and pretty villages in the south to the Hebridean Isle of Mull, home and burial place of Lachlan Macquarie. The nearby, tranquil islet of Iona is the birthplace of Celtic Christianity in Britain and traditional burial ground of Scottish Kings. Experience the Isle of Skye, the largest island of the Inner Hebrides, renowned for the dramatic peaks of the Cullins as well as Flora MacDonald’s famous flight across the sea with Bonnie Prince Charlie. Travel to the Outer Hebridean Islands of Lewis, known for its wild moorlands, and to the more mountainous Harris, almost but not quite its own island, and probably most famous for the locally produced cloth, Harris Tweed.
The outer islands of Orkney and Shetland are closer through language, life style and history to their Nordic neighbours than to Lowland Scots. Just over 300 km from the Norwegian coast, the Shetland Islands, of which only about fourteen of the hundred or so are occupied, were under Norse rule until 1469. Shetland is known for its tiny ponies, seals, and colonies of sea birds as well as historical treasures such as Jarlshof – a site occupied for over 3,000 years. In contrast the Orkney Islands, of which eighteen of the sixty-seven island are inhabited, lie within just 10 km of mainland Scotland. They are, however, perhaps even more renowned for their dramatic coastal scenery, abundant marine bird life and, arguably, Europe’s greatest concentration of prehistoric sites.
Explore these islands with their sea-lochs, limestone grasslands dotted with sheep and cattle as well as crofts abandoned during the Highland Clearances. Learn about ancient Standing Stones and Brochs. Experience the culture and heritage of the Scottish islanders as you stay in comfortable family-run hotels and guest houses and cruise to some of the country’s most isolated islands to experience some of the most awesome scenery in the British Isles.

Isle of Skye
The Isle of Skye, renowned for its rugged and dramatic volcanic scenery has enjoyed a turbulent geological history and is the largest island of the Inner Hebrides. Experience numerous sea-lochs, limestone grasslands dotted with sheep and cattle and crofts.
These abandoned crofts pay testament to the vicious Highland clearances, when landowners demanded rent instead of military service from their tenants following the battle of Culloden. The Island is historically significant for providing refuge to Bonnie Prince Charlie after the battle.

Arran
With its rugged granite mountain peaks in the north and green rolling hills and pretty villages in the south, it is believed that Arran has been populated since the end of the last Ice Age. The island boasts a number of Neolithic burial tombs and Bronze Age stone circles. The island was purchased from the Vikings after the Battle of Largs and it is said that Robert the Bruce received the signal to re-invade Scotland while his followers were harassing the English garrison at Brodick Castle. The island is now best known for outdoor activities and its whisky, cheese and oatcakes.
For more details about possible tours to Scotland or to arrange a bespoke adventure, please get in touch with us.