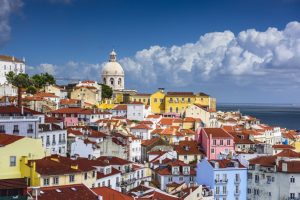 Portugal seems to have no obvious geographical claim to nationhood, yet this western extremity of the Iberian Peninsula has existed with virtually unchanged borders for nearly 800 years. Its 10 million people speak their own language, follow their own unique cultural traditions and have a centuries old tradition of proud independence based largely on distrust of their larger neighbour, Spain.

Portugal’s history is largely indistinguishable from Spain’s during the early period, inhabited by Celtic Iberian tribes, conquered by the Romans and overrun by the Islamic Moors. However, it was in the 12th century, during the re-conquest of the peninsula for Christianity, that Potucale, a small county of the Kingdom of Leon and Castile, was declared independent by its first king, Afonso Enriques, in 1139.

The new kingdom expanded south to the Algarve and Portuguese sailors explored the African coast and the Atlantic. Portugal’s Golden Age reached its zenith with the voyage of Vasco da Gama it India in 1498 and the discovery of Brazil in 1500. Eastern trade brought incredible wealth but military defeat in Morocco brought an end to this prosperity.

Spain invaded in 1580 and the kingdoms were united for the next 60 years. After Portugal regained its independence, her future was restored by the discovery of gold in Brazil. The country underwent much modernisation after the Great Lisbon Earthquake of 1755 but the Napoleonic invasions of 1807 and the loss of Brazil in 1825 left Portugal impoverished and divided. Finally a republican revolution overthrew the monarchy in 1910 and a military coup in 1926 led to the long dictatorship of Antonio Salazar, who stayed in power until 1968. The Carnation Revolution ended dictatorship in 1974 and democracy was restored in 1976 so that Portugal started the long process of recovery to join the European Union in 1986

For a small country, the regions of Portugal are immensely varied. The rural Minho and Tras-os-Montes in the north are the most traditional. The south of the country, the Algarve, is blessed with beautiful sandy beaches and a warmer climate. Two great rivers, the Tagus and the Douro, rise in Spain and flow westward through Portugal into the Atlantic. From the upper reaches of the Douro Valley come Portugal’s most famous product, port wine, from steeply terraced vineyards, hewn out of the mountains. The Tagus by contrast is wide and languid, often spilling out over the flat fertile Ribatejo flood plain.

Lisbon: The Portuguese capital on the banks of the River Tagus, was rebuilt in the 18th century following a devastating earthquake.  World traders of renown, the Portuguese sailed the seas in search of new territories and merchandise.  Remnants of this Golden Age of Discovery still exist in and around the capital and remind us of Portugal’s maritime heritage.  Experience the mediaeval Alfama district, the 18th-century Baixa, the reconstructed centre of the city, and Bellem where the wealth of the maritime Age of Discovery is evident.  This great wealth is also reflected in the great summer palaces of Sintra and Queluz.

Braga: The verdant valleys and vine-clad slopes of the Douro and Minho regions are considered to be the birthplace of the Portuguese nation.  From Braga, the seat of Portugal’s most spectacular religious sanctuary, we explore Guimaraes where Alfonso Enriques proclaimed himself King of Portugal in 1139, and Oporto, Portugal’s second-largest city which gave its name to the popular fortified wine, Port.  In Braga you can learn about the birth of the Portuguese nation, the significance of the Catholic Church in Portuguese life and enjoy sampling the famous port wine produced in this region.

For more details about possible tours of Portugal or to arrange a bespoke adventure, please get in touch with us.